And gig three of the week: Fantastic Negrito at the Night and Day Cafe in Manchester. Anyone who knows me well knows that I have a little bit of an addictive personality and when I find something I really like I tend to obsess about it slightly. Fantastic Negrito is a case in point. You haven’t witnessed me banging on about him yet because I’ve been deliberately restrained. But you will do. He’s one of my track of the day selections next week, for example.

As a means of introduction I will now give you four facts about Fantastic Negrito:

4. He’s surely one of the top five coolest people alive

Anyway, I saw he was playing in Manchester and I had to go and see him.

Support was provided by local artist Maddy Storm who is listed on Spotify as an art rock performer. Reading that before the gig made me a little apprehensive, but I needn’t have worried because what I saw and heard wasn’t quite that at all. Storm plays a very legitimate brand of alternative hard rock. She has a belting voice which verges on classic heavy metal – I kept thinking of the mythical high C when she was performing. It probably wasn’t a C at all, but she hit a lot of high notes and she hit them perfectly. 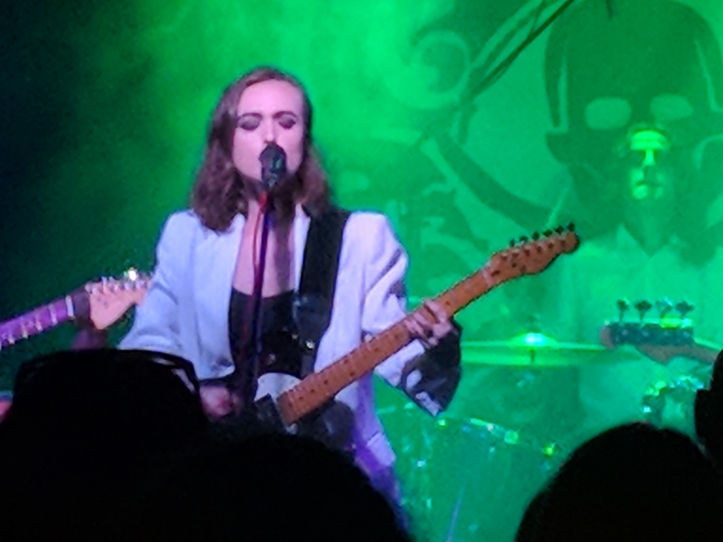 Bizarre as it sounds, Storm and her band mostly made me think of The Cult. I don’t know why as they weren’t styled that way or even sounded that much like them. Maybe it was something in the rhythm of the songs or the energy on stage. She was really, really good anyway and her short, six song set flew by. (It’s not often I find myself wishing a support act could squeeze in an encore).

Dphrepaulezz took to the stage looking very dapper. Which ultimately didn’t last: it was so incredibly hot in there he ditched first the cravat, then the waistcoat, then the shirt. In the end he was wringing the sweat out of his vest. “I think I lost three pounds up here. I’m like melting chocolate”. By that point I was flitting in and out of consciousness myself down on the dancefloor. But I’m getting ahead of myself slightly. Let’s back up.

If you haven’t come across him before, Dphrepaulezz/Negrito essentially plays electric blues and roots rock. By simply writing that sentence though I’ve already done him a massive disservice because his music is simultaneously so much more than that. He is genuinely genre-fluid it seems to me, and into that bluesy foundation he weaves elements of classic Motown, funk, gospel, hip-hop. Sometimes in the same song he seems to channel the spirits of Howling Wolf, Jackie Wilson, Prince and Rage Against the Machine, all at once. It’s a real melting pot of influences. All enabled, I think, by the fact that he doesn’t really have a typical blues voice. He has a very versatile soul voice which can slither or glide effortlessly between Sam Cooke and Marvin Gaye via the reverend Al Green. It’s that counterpoint between the music and the vocals that provides the launching point for so much experimentation and fusion.

To begin with, most of the set comprised new songs from the upcoming Fantastic Negrito record, set to be released early next month. So I don’t know the names of any of them. They were pretty great though and indicative that he has essentially just picked up here where The Last Days of Oakland left off. I can’t wait to be honest.

This time I did manage to get a fairly decent video of about a minute’s worth of one of these new tracks, one of the quieter ones which I thought may be easier to capture with adequate sound quality.

Of the songs I did recognise, however, ‘Scary Woman’ was a riot, ‘In the Pines (Oakland)’ (his version of the Leadbelly classic ‘Black Girl’ which Nirvana also covered on their Unplugged record) was suitably epic, and ‘Rant Rushmore’ as acerbic as you’d hope it would be. Dphrepaulezz also has a hefty dose of social conscience which is evident right across the debut record, no more so than on tracks like ‘Working Poor’. Here, he introduced the track ‘Hump Thru the Winter’ with the assertion that America right now has “three broken ribs and two broken legs”. This is a song, incidentally, that includes the lyrics “I’ve been working three jobs just to pay my bills / if that don’t break me, nothing will”. You can’t beat a bit of social commentary in my opinion, it shows an artist aware of the world around them.

This was a great end to my week of gigs. The heat may have finally killed me off, but of the three very different concerts I attended, this one was very much the wrap party. There was nobody, literally nobody, standing still all the way through this one. From dad dancing to outright pogo-ing, everyone was feeling it. Great show. Bring on the new record, and bring on the world domination for this guy.