Album review – THE WANTON BISHOPS ‘Sleep With The Lights On’

It’s been one week since I first listened to The Wanton Bishop’s track ‘Sleep With The Lights On’, and I still can’t get it out of my head. I can’t stop listening to it, either. In fact, I can’t stop listening to this entire album. It’s the best kind of musical crack: the kind you can’t get enough of, the kind you don’t want to get enough of, the kind where the craving just gets stronger and deeper and more impossible to resist the more you listen.

In one way, the The Wanton Bishop’s music is familiar territory: it’s the blues – heavy, hot and deep – mixed with a shot or two of real, honest to goodness rock and roll. I already love that stuff, but there’s something else here, too, something different than the same-old: and that something is like a burr or a hook that got itself stuck in my head as soon as I listened to Sleep With The Lights On. It’s a vibe, a beat, a pulse, and it’s there in the irresistible sway of the title track, and the chanting backup vocals on the same tune. And it’s there again in the twang of the strings in the dark and swirling ‘Come To Me’. Is it a musical hint of The Wanton Bishops’ home-town Beirut, of the Middle East, or is it just their own special line-hook-and-sinker? It’s always hard to analyze your own infatuation with a band’s music, but whatever it is, it’s frigging irresistible. 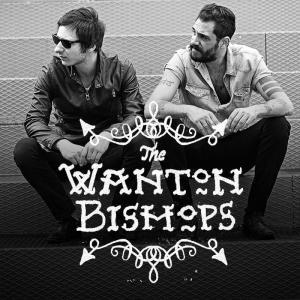 So yes, The Wanton Bishops are based in Beirut, Lebanon and the band is essentially a two-piece that picks up supporting players on bass and drums, and their own creation story is worth quoting in more detail:

Nader and Eddy met in a bar in their hometown of Beirut, Lebanon. Well, technically, they met outside of a bar, in the middle of a fistfight. Luckily they weren’t fighting one another, and their friendship soon developed over cheap tequila and a shared love of stompy blues music and rock and roll.

Sleep With The Lights On is essential listening from beginning to end. There are tracks that go deep into blues territory (‘Bad Rhyme’ is a prime example), others that swagger and riff into rock and roll (just listen to that throbbing bass and fuzzy guitar on ‘Smith And Wesson’ – with a jangling saloon piano thrown in for good measure), and some tracks that feel like old-school 50s rock’n’roll, like ‘My Kinda Lovin’’ (or ‘Shake’ – the band’s 2015 single).

Throughout, there’s an addictive, earthy and gritty feel to The Wanton Bishops’ music – with plenty of harmonica, banjo, rambling guitar, thumping bass and drums that rattle and rumble your blood and your bones (and some oud-playing, as well). And then there is Nader’s whoa-mama!-voice, this amazing, gritty, raw vocal that lay bare heart and soul and desire and longing and love and sorrow.

Blues-infused rock and roll is everywhere these days, but The Wanton Bishops play their music with the kind of conviction, heart, skill, and originality that cuts through all pretension and bullshit. Check out this band, check out this album, and catch them live if you can: they are currently busy touring France.

Watch the Red Bull TV documentary about The Wanton Bishops.