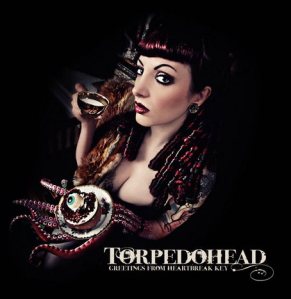 “Greetings From Heartbreak Key” is a killer album that comes at you with such fire and so much relentless energy that any resistance is futile. The tunes have the gritty, urgent feel of party nights at boozy clubs with neon-lit city streets outside: it’s dirty, rough, real, and so damn alive that it makes you just want to get up and move to it.

Torpedohead have been playing gigs all over Europe for years, and that experience clearly shows on this album. The guys in the band – Sven on lead vocals and guitar, Hardy on bass and backing vocals, and Zasch on drums – are rock-solid and confident in every riff and solo, every melody and chorus. The music is deeply rooted in the classic rock’n’roll of the 1960s and 70s (even the 1950s flash through!), but it has been kissed hard by punk and grunge, and the sound gleams with hints of The Clash and early Rolling Stones.

“Greetings from Heartbreak Key” lights the fuse with “Gasoline”, a kick-ass track that shows off all the best stuff about this album: the irresistible, shake-your-bones drumming, the heavy bass that sinks its hooks into you and won’t let go, the well-oiled and shiny riffs, and the raspy, throaty vocals that cranks Torpedohead’s sound into overdrive.

“Bleed on me” is a piece of fast and furious, slamming perfection – its hard rocking attitude stitched up with catchy chorus. After that, the album speeds right into the deliciously raunchy “Love Is A Dog”. The band keeps it up like that for the entire 12 tracks of the album. Standout tracks for me include “Rock N’ Roll satellite”, an infectiously upbeat track with glossy vibes of the 1960s and even the 1950s below the roughed up surface. “Heartbreak Key” has a great catchy, melody, while “Moonshine Highway” is a full-speed-ahead rocker with some massive and irresistible guitar-work.

Some truly fantastic drumming and scorching guitars make “Burning Bridges” one of my favorite tracks on the album, and the same goes for the catchy, infectious “Black Rain”. The brash and joyful “Rotten Radio” closes out the album, and left me gasping for breath and wanting more.

“Greetings From Heartbreak Key” is simply an awesome album from start to finish. “All killer, no filler” might be a cliché, but it’s a phrase that could be used for this album.

This is Torpedohead’s third release after their debut album and an EP, and it is a stunner. It’s an album that completely bowled me over and all I really want to do is say: listen to it.

(This review was originally published at Hard Rock Nights.)