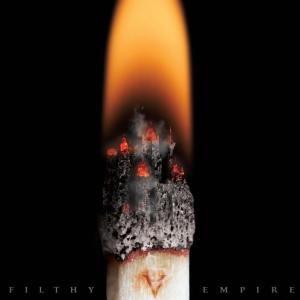 “Filthy Empire” is a bold, brash and confident first full-length release from UK-rockers Heaven’s Basement, a band that has earned its musical stripes (and fans) by playing live shows and festivals all over Europe since starting out in 2008. That live-show experience pays off in spades here, as the band delivers a barnburner of an album that is chockfull of no-holds-barred, hard rocking tunes and a sound that flashes with an intense, guts and glory kind of energy.

Nobody holds anything back here: bassist Rob Ellershaw and drummer Chris Rivers gives the music the weight and heft it deserves, guitarist Sid Glover delivers the goods in quite formidable fashion and the dynamic and passionate vocals of Aaron Buchanan adds some serious heat.

First track “Welcome Home” is a tune that is literally kicking and screaming with rock’n’roll life, bursting with heavy drums, smoking hot riffs and intense vocal power. “Fire, fire” is another stunner, revving up the drums, bass and guitar until Buchanan’s voice kicks in and puts it all into overdrive “throw the matches to see what you can ignite”.

And as if that wasn’t enough, the fierce and fiery “Nothing Left To Lose” fans the flames even higher with a chorus that floors me every time. It’s an impressive one-two-three punch that definitely knocked me out. “Lights Out In London” slows things down a bit with a darker vibe, but the fire still seethes and smolders right below the surface.

After that it’s time for my favorite track on the album, the high-powered and relentless “I Am Electric”, with barb-wire-sharp vocals and lyrics wrapped tightly around some hard and heavy riffs and drums. It’s a killer track with Buchanan’s voice pushing an already great tune to the next level.

Heaven’s Basement doesn’t let up on the second half of the album. For swaggering and sexy rock’n’roll goodness, there’s “Heartbreaking Son Of A Bitch”, the kind of hugely enjoyable and rowdy track that makes you long for a mosh-pit. And there’s also the deliriously catchy rocker “Can’t Let Go” flashing a jagged edge in the lyrics: “you know that I’d kill for you”.

Ballad “The Price We Pay” is just long enough to let you catch your breath before “Jump Back” starts up with an almost Rolling Stones’ like strut and some sliding riffs, and finally there’s the ferocious “Executioner’s Day” to bring the house down.

“Filthy Empire” has no real weak spots. It’s a very impressive album that shows off some genuine depth in both lyrics and music, delivered by a band that sounds ready and hungry for the big-time: they certainly seem to have enough high-octane rock’n’roll fuel to carry them higher and farther.

(This review was originally published at Hard Rock Nights.)